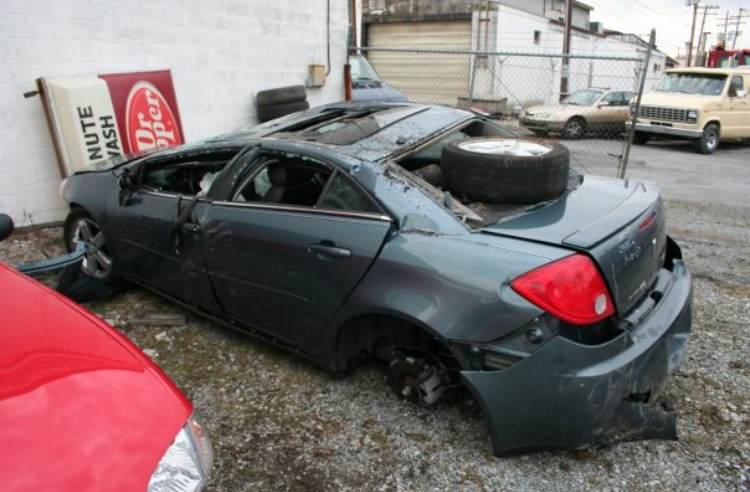 Early January 2007 was unusually warm in Washington County, MD. The weekend of January 6-7 through Monday the 8th saw a great deal of rain and balmy temperatures. I was teaching English at Williamsport High School in Williamsport, MD that year while living in Boonsboro, MD. My children, Kayla (17) and Marcus (15), were a senior and a sophomore at the same high school. Since Kayla had her driver’s license, I had the privilege of driving to work in peace…and the kids were able to leave home much later! That Tuesday morning, despite the frigid, typical January cold snap that hit the night before, I was in an unusually good mood. I dressed in a long suede skirt, a favorite sweater, and boots… and I was having a very good hair day. I got into my 6 month old Pontiac G6 and headed to work.

It finally felt like January. I could actually see my breath in the crisp air, but it was ok; it was January. I turned left on to Sharpsburg Pike and then right on to Lappans Road to head toward Williamsport. I had driven this road every day since I started teaching at WHS in 2003, so I knew it well. There is a notorious S-curve on Lappans Road that requires drivers to slow down. This curve is also shaded by trees and in the natural drainage path from the surrounding hills. The rain from the previous few days froze under the cold front of Monday night creating a large patch of black ice.

I slowed and leaned into the curve – I saw what I thought was a small patch of ice, so I took my foot off the break to coast over it. Once over the ice, I put my foot on the gas to accelerate out of the turn. Unfortunately, the patch of ice I thought was small actually covered the roadway. As I hit the gas, my tires immediately spun, and my little G6 slid sideways and slammed into the rocks on the right.

The car immediately went into a spin. I remember being immediately scared; I offered up an audible prayer, “Help me, God!” The G6 felt like a washing machine, and I just wanted it to stop. When it finally did come to a stop, I was hanging upside down by my seatbelt. I was completely disoriented, but I remembered that I had been paying for On-Star since the free 90-day trial was over. I closed my eyes to remember where the On-Star button would be… when it started talking to me… telling me in a lovely voice that the air bag had deployed (I knew that) and that I was not connected to the network… great… a dead zone… the one time I actually need it.

It wasn’t long before a gentleman got down on his hands and knees to peer into the smashed drivers side window at me. “Do you need some help, ma’am?” Yes, he actually asked me that… and I remember very clearly that my sarcasm bone was intact because I very nearly said, “No, I think I’ll just hang here for a while.” Realizing the precarious position I was in at the time, I thought better of it and actually said, “Yes, please…” At that point another man opened the passenger side door and poked his head into the car. “I’m going to unhook your seatbelt,” he said.

He unhooked the seatbelt, and I crawled out of the car. By then a crowd had gathered, and one of the men put one of the floor mats on the ground so that I could sit… remember I’m in a long, suede skirt. I suddenly remembered my kids. I didn’t want them coming down the road behind me and see my car upside down. One of my helpers got my purse, glasses, and phone from the car. I called my husband Tom and told him to tell the kids to take another way to school… but don’t tell them why. I didn’t want them to worry. I told Tom I would meet him at the hospital.

Some nice ladies helped me to get up… the ambulance arrived… they saw me standing, assumed I was fine, and told me to sign the paper that said I refused the ambulance ride to the hospital. “Just go to see your own doctor today,” they said. I was dumbfounded, not sure what to do… in shock… and now stranded because my car was upside down. So, I called Tom again. He was already at the hospital waiting for me. A kind lady told me she could wait in her truck in a nearby driveway until he arrived to pick me up.  I climbed in her truck, sat down, and started to feel the pain…

I tried to make small talk with the lady while we waited. I asked her for her name because I wanted to make sure I could send her a thank you note for her kindness (my mother trained me well), but I just couldn’t remember it. Tom finally arrived, helped me into his truck, thanked the lady and jumped into the driver’s seat. On the way to the hospital Tom informed me that he had called my mom and the school to let them know that I needed a sub… and being the good teacher that I am, I called the school to give them my plans for the substitute. Yes, we kept emergency plans in the office, but my AP class was working on a project, and my English 10 class could continue their novel… and I just needed to check in. So, yes, I called in substitute plans on the way to the hospital.

Once we arrived Tom dropped me off so that I could go to check in while he parked the car. I checked in… and of course they asked why on earth I didn’t come in the ambulance!  I could have gotten right in – at this point I needed to wait in line. So, I went back to the bank of chairs and sat down. It wasn’t long before a man decided to sit next to me.

“Can I get you something? Do you need something to drink?” he asked.

“I brought my buddy in last night. His girlfriend broke up with him, and he cut off his finger to see if she would come back”  (That was his story, I swear.) “So, I put his finger in a baggie with ice and brought him in… You know you have really beautiful hair.” (Remember I told you I was having a good hair day)

During his very long story (I shorted it for you, you’re welcome), I kept wondering where my husband had gone.  How hard was it to park a truck? He finally shows up and sits on the other side of me. At the mention of my hair, I realize that it probably was a mess from the accident. I reached up, touched my hair, and my hand came down with a fistful of hair. I started to panic!  Why was my hair falling out?!

My new gentleman friend wanted to take the large clump of hair from my hand, and my husband finally stepped in, “No, I’ve got this. Thanks.” He took my hair to the trash as I proceeded to gather clumps of loose hair from my head. At this point I was in a panic. What was happening to my hair? The windshield had crumbled sending glass shards all over me… cutting my hair. I had thought about getting layers, but now it wasn’t an option. I had no cuts on my face or scalp, but I had glass all through my hair.

At this point I was starting to feel the pain increasing. My teeth had pierced my tongue, my jaw was swelling, my head was pounding, and my left leg was killing me. We were called back and the examination began… Remember I was wearing a skirt, sweater, and boots… so I need to get them off or have them cut off… then I had nothing on my feet. I still have the nifty socks they gave me.

After the exam I was taken to x-ray and then for an MRI. Once the MRI was complete, and my claustrophobia was reminding me how real the fear actually is, a new nurse helped me up, and I hear, “Mrs. Peterson! How are you!?” There are many places I enjoy seeing former students… dressed in a thin hospital gown with snazzy socks sporting a killer headache was not the time or the place. BUT, I smiled, “Well, Hi Ashley (so glad they wear nametags), I could be better. So nice to see you.” I’m sure the conversation continued, but I just don’t remember any of it.

They placed me in a wheelchair, called for someone to return me to my area, and put me into the hallway to wait…and wait… and wait. I have never felt so helpless in my life. I was tired, in pain, and I just wanted to go home, but I couldn’t even move from the hallway. I kept wondering if I just started wheeling myself if I could find where I needed to go…but I couldn’t remember how I got there. I just had to wait. People walked by me and ignored me. I felt practically naked… wearing hospital socks… and I was at the mercy of the nurse who was supposed to take me back to my “room.”

After all the tests were finished… I was told that I had a concussion and many bruises… but that was it. My jaw was so swollen I had to eat very soft things for days because my teeth couldn’t even meet. My left leg had a bruise on it that I kept for years… but I was ok.

What did I learn? I learned that God wanted me to remain on the planet for a while longer… and that seatbelts are worn for a reason.

For those of you who are wondering about how my kids handled all of this…while I was enjoying my x-rays and MRI, Tom called the school and got word to Kayla and Marcus that I was ok. I was home on the couch when they arrived home from school.

When I think of the things in my life that I would have missed since that time, I thank God for keeping me safe that day. Every day is a gift; never take one for granted.

iThere are no comments

This site uses Akismet to reduce spam. Learn how your comment data is processed.

Begin typing your search above and press return to search. Press Esc to cancel.